Just came back from a spectacular 6 days in Denali National Park. A truly phenomenal experience; a park with exceptional beauty and some of the best hiking in the world. Combine that with hundreds of grizzlies and some fairly hazardous terrain I was excited to get out there. On one of the hikes I had a bit of a ‘situation’ on the McKinley River Bar which I’ll describe in this post. 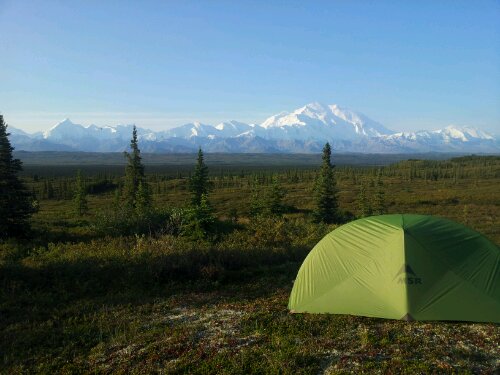 I asked the park ranger if I could get that tree cut down but he wouldn’t. Selfish.

One particular day I set out on a day hike suggested by one of the park workers. It started off nice and easy down a track through a forest with signs of wildlife everywhere: moose, caribou, wolves, bears. Awesome.

The forest track ended upon reaching the McKinley River Bar; a lot of Mount McKinley’s glacier meltwater ends up flowing through here and it can vary significantly in height and speed depending on the time of day. The later it is, the higher and faster it tends to be, particularly on a warm day like this day.

It’s about a mile wide and has a series of 10 or so river crossings; I crossed heading towards McKinley wanting to get as close as possible to the magnificent mountain without developing altitude sickness. The time was 11am already and it was an arduous crossing. At back of my mind I knew it would be worse on the way back but I was so intrigued to check out the other side.

It took an hour to cross and I began my hike up the hill on the other side. When I got to the top, after another hour, I was rewarded with the most incredible view I’ve ever seen; I’m not sure the picture does it justice, but:

And short clip:McKinley from Turtle Hill

McKinley river bar all but forgotten I headed back four and a half hours after starting the hike. The descent was fairly easy but covered in tundra and dense shrub; the path often disappeared through a series of creeks.

I reached the river bar at 3 pm knowing it was going to be challenging to cross but hadn’t really appreciated how hard it’d be.

Retrieving the long stick I’d used before to test the water depth before each step (the rivers were filled with silt and very difficult to gauge), I set off nervously wondering whether I should wait out the night on the river bank. I didn’t want to get stuck halfway across with the ever rising meltwater runoff.

In summary it took 2 hours to cross approximately 10 fast flowing icy cold river sections; some sections looked like high grade rapids, (you’d have a good time on a kayak). For each crossing, I had to keep hiking upstream until reaching a point under thigh /waist deep or I risked  being washed away.

I had ended up hiking almost 4 miles up the river bar by the time I reached the other side. My feet and legs were freezing, my feet were cut from the stones in my shoes, I was thirsty with no water and I had a three hour hike ahead of me but I was so happy to be on the other side I didn’t care.

The hike back was somewhat arduous through dense shrub down the river bar’s north bank; no way was I going to cross back over any of that bar no matter how much easier it would have been. Shortly after I saw some grizzly bear paw prints, so started yodelling and had my bear spray handy:

The rest of the hike was uneventful but I was delighted when I got back to camp and on a surprising high from my adventure. Now back at the park entrance heading to Cantwell and then east on the Denali Highway (another gravel road that I’m told is spectacular), south on the Richardson and then northeast to Tok.  I will take a week and there’s no reception where I’m heading… 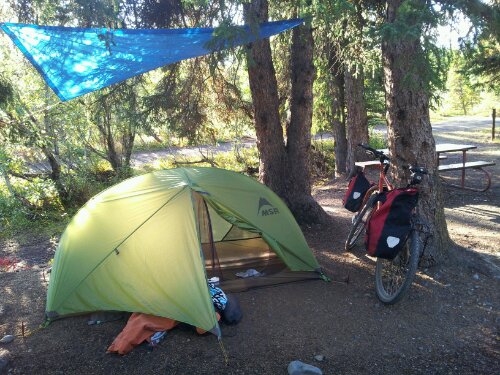 Top of Igloo Mountain on another day hike