Having ridden with Cass in Colombia over the tough (and prohibited!) pass of Volcano Ruiz, I was familiar with the kind of riding he likes.  The route he’d given me was the first stage of TEMBR – the Trans Ecuadorian Mountain Bike Ride – which he’s been developing with the Ecuadorian Dammer brothers (more info here on Cass’ site). The four of them are currently working on developing a route that weaves together a series of backcountry, low traffic and primarily dirt roads by which to cross the entire country, through Ecuador’s volcanic corridor.

I knew it wasn’t going to be easy.  However, now sitting in my hotel on a natural high with my burnt peeling nose in Cotacachi I can say I wasn’t expecting it to be as tough as it actually was!  It was however an amazing experience and sits near the top of my hall of fame for mountain routes.  I now have extremely high expectations for the rest of South America.

From hot and sweaty roller coaster riding in deep winding canyons surrounded by huge prominent mountains at around 1000 metres to stunning barren chilly paramos with striking panaromas at nearly 4000 metres, the change of environment also brought a change of inhabitants from markedly different cultural and ethnic backgrounds and with it an unexpected and fascinating perspective.  It was at times both humbling and mind blowing to be there in such an unfamiliar, diverse and impressive environment, a real smorgasbord of different new experiences for my mind to feast on emotionally and physically.

Choosing a five or six day high mountain route that could simply be made in two days by following the paved road around the base of the mountains would be total madness to some but to me it made perfect sense (most of the time).

The first night was spent in Reserva Ecológica El Ángel. Along with free entry into the park, I was given a bed (& breakfast!) for the night. Differences were already notable, in Colombia a 37,000 peso charge is often standard in their National Parks; here in Ecuador – nothing.

I sought a backroad alternative from the paved section to Mira and found a pleasant route that climbed up past Ecuadorian farmland, dropped down an awesome grassy / dirt track and onto the long cobbled descent via Hato and Piquer. It spat me out on the paved road just above Juan Montalvo awesome. Finding the route took a bit of work, a night in a farm and some extra hill climbing since information was difficult to find – scroll to end for ‘Route Thoughts’. 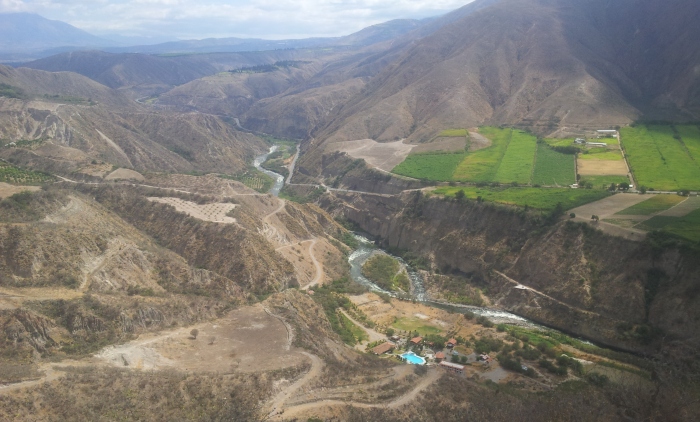 Heading down into the canyon after Juan Montalvo. An alternative route can be found to Santa Ana although they told me it would involve carrying my bike and hiking for half an hour over a rather dangerous and rocky path and what looked like some kind of jagged point with steep drops either side.  It did look spectacular I have to admit, but it was also hot.  Next time…

After dropping all the way from Juan Montalvo to La Concepcion on a paved road through various towns, the change in ethnic background of the inhabitants was notable. Virtually all seemed to be of African origin and equally as friendly as their higher mountain dwelling counterparts. All reports from locals were the same – this was a safe route from a security perspective.

After a night spent camped under a shelter in a public building with limited privacy (although it wasn’t a problem security-wise) in El Rosal, the road dropped steeply down to the water. 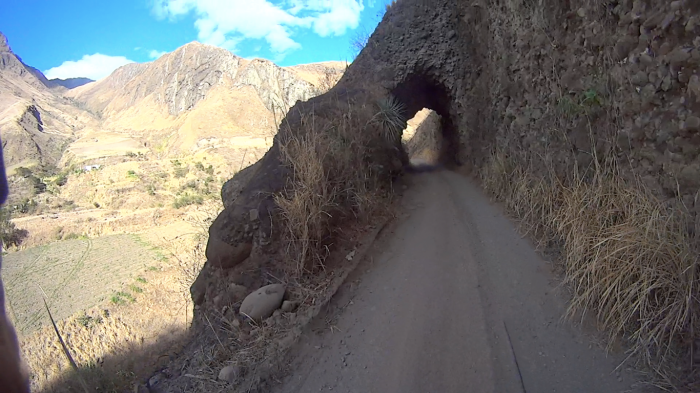 Once down at the river, the path picked up an interesting route of an old railway line.  The main paved ‘Pana’ continued on the other side of the valley.

After a second breakfast in San Geronimo I was at the start of the climb that would go from around 1000m to 3900m.  A huge change in elevation by my standards. The heat at the lower level was challenging due to the lack of shade on the dusty road. 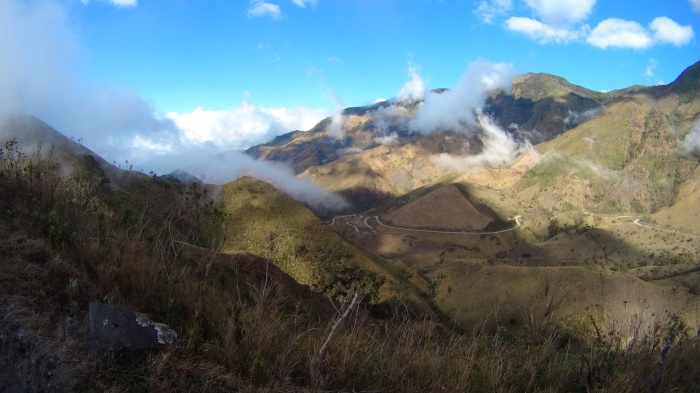 After spending the night at the halfway point in Buenos Aires, the road continued steeply upwards with the occasional downhill as a ‘reward’.  The road became rougher and steeper just before the paramo.

A farmer passed on his horse shortly before I hit the paramo.  Was it ok to drink the water? “There’s a drought but yes it’s clean and safe to drink”, he claimed. I had an upset tummy for the next 12 hours… In spite of this it was stunning and exhilarating to be up in the barren, windy environment. I camped in an area with some shelter from the wind and hoped the cows that lived there didn’t copy my plan during the night. I’ve noticed they can be quite nocturnal with their activity.

Day 6: ready for the final remaining climb to the top. 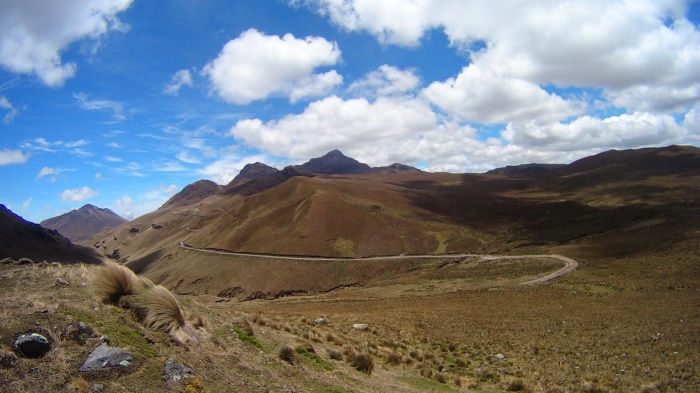 Looking back at the route I’d taken. 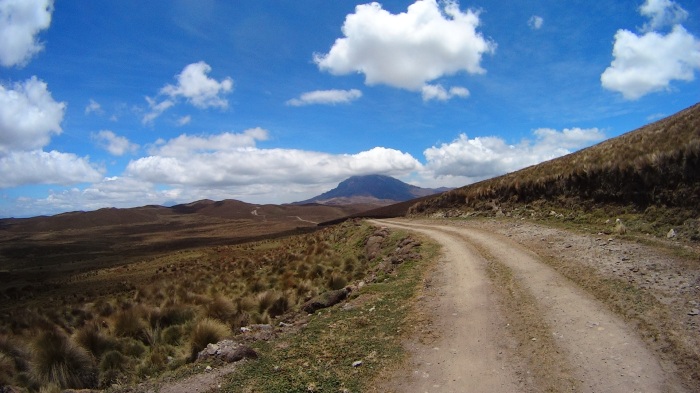 And forward… Reaching the top and the final bits of uphill.

After cresting the top and plummeting back down 1000 metres, I thought I’d as good as made it to Otavalo and started to relax.  However, I found I hadn’t and there was a reasonable amount of riding to do, the ‘foothills’ of the higher mountains meant more ups and downs.  Running out of food and with no shops my morale started to drop.  Unwittingly I took a wrong turn and only realised my error 2km later and 100 metres lower.  That was a low point. I rested my head on my handlebars in despair,  I had just added an unnecessary climb to my exhausted body on a rather badly maintained cobbled road.  After a few sharp words to myself I kicked myself into action and headed up.  A few kilometres later a similar thing happened and I realised I needed to stop for the day. So I did and after climbing back up the steep cobbled road I was saved by some very kind hearted folks in Pucalpa.

My Saviours. Against their insistence, I ended up giving them my last $10 for their kind hospitality. I thought I was closer than I was to Cotacachi. On their recommendations I deviated to avoid Morlan (some kind of delinquency problem); however after speaking to Michael Dammer I’m not even sure it would have been on the route. Anyhow, this deviation resulted in a loooong cobbled descent followed by a very hot and unwelcome paved climb with insects attacking my legs. I found myself in Imantag with no money, exhausted and no decent food. A Jehova’s witness saved me with $5. I considered the possibility of the existence of God as I fed myself and re-joined the Trans Ecuador on the remaining cobbled section to Cotacachi.

Burnt, tired and happy to be in Cotacachi finally. What a ride!

Cass is currently working on the TEMBR website, which will contain complete gpx files and various route notes for the ride. I’ll add a link to it when it’s online.

Overall, a fantastic route.  Go and ride it. 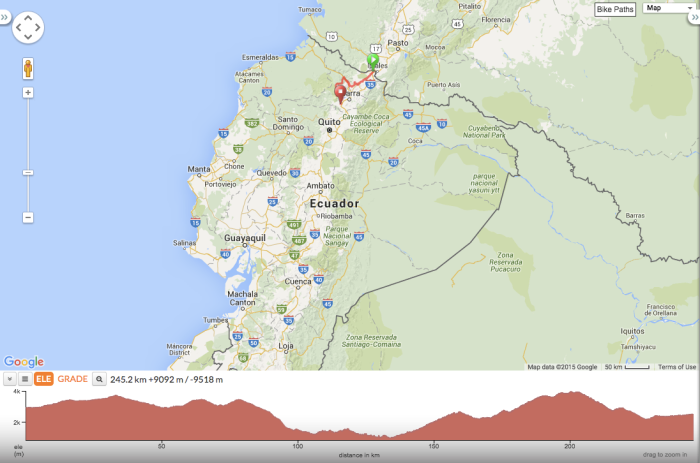